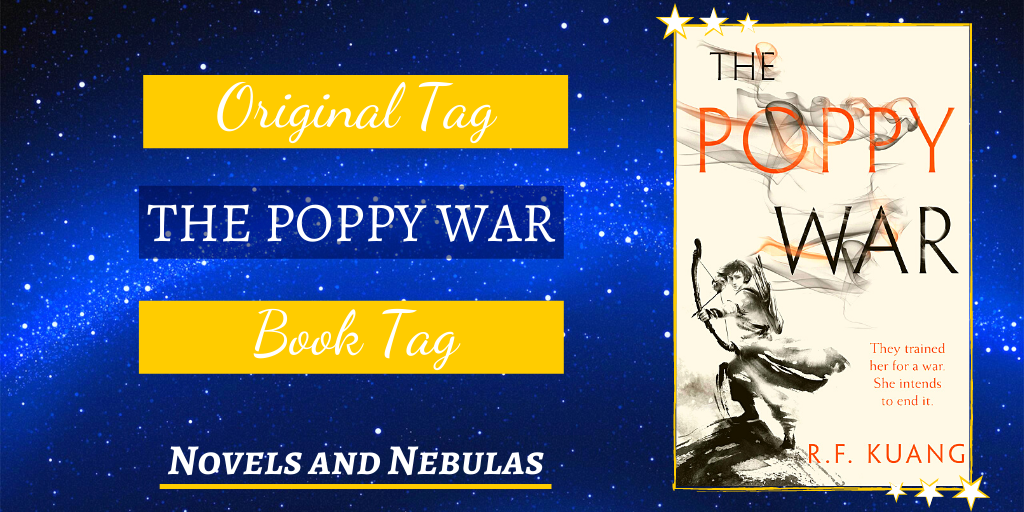 This tag was created in collaboration with Vee @ Vanshika’s Books and Krisha @ Bookathon, who love this series just as much (if not more) than I do. Krisha and I are hosting a readalong for The Poppy War series in September and October, with an IG live scheduled with R. F. Kuang herself, so don’t forget to join us as we prepare ourselves for The Burning God coming out in November. We were thinking of fun ways to celebrate the series and hit upon the idea for a book tag, which Vee kindly accepted to work on together. We had the best time coming up with prompts, refining them, freaking out over the series and I’m so proud of how it has turned out. I really hope you enjoy the post and decide to do The Poppy War Book Tag on your bookish platforms too!

The first book I read with a true anti-heroine character was Forest of a Thousand Lanterns by Julie C. Dao. Books are written, especially in the SFF genre, from the perspective of the heroes and it was refreshing to see a morally grey to an outright villain character in this. While I couldn’t sympathize with nor support her actions as Xifeng went down a rabbit hole of questionable decisions, I could understand what drove her. If you’re looking for an anti-heroine story but something lighter than The Poppy War, I highly recommend this book. This is a reimagining of the Evil Queen character from Snow White and set in an East Asian-inspired world.

Which character deserves more spotlight in your favourite series?

Sanjeet from Raybearer by Jordan Ifueko is the epitome of a tough-guy exterior being a cinnamon roll on the inside. In the first book in the series, we get to see Tarisai and Dayo a lot but I wanted more Sanjeet. I think the next book will feature him more heavily, which I’m really looking forward to! Raybearer is a recent YA fantasy release that has become a new favourite for me. I suggest you get the audiobook version if you can because the narrator has done an amazing job as well.

My mind immediately went to Kitay, but I picked Binti from Binti series by Nnedi Okorafor for this answer. She is a strong female character in the intellectual sense and I love her for it. This is a sci-fi series that follows Binti as she leaves her home planet to attend the prestigious Oomza University. She is the first of her people to do so, which creates a complicated internal conflict in the first book. Even though they are a series of novellas, we get a good sense of Binti’s character and sci-fi fans should definitely pick this up!

What makes you empathize with your favourite morally grey character?

My favourite morally grey character is (you’ve guessed correctly) Fang Runin from The Poppy War series. She’s one of those characters who started from nothing but carved out a space for herself in (a fictional) history by sheer determination. She’s fierce and headstrong, which I love about her and can relate to. Even when she makes heinous and unforgivable decisions, I can sympathise with her thought process, flawed though it is. Seeing her arc in The Poppy War was heartbreaking and every book since has also left me shattered.

Mad Gods and their Maddening Power

What’s your favourite novel about gods and their powers?

Aru Shah and the End of Time by Roshani Chokshi is one of those novels that I will bring up at every opportunity I can. It is part of a middle grade series, so it’s light-hearted and a lot less epic in scope. However, I think it’s a wonderful book for anyone looking to read a fictional and modern take on Hindu mythology. The main character, Aru, is a demigod and reincarnation of one of the five Pandava brothers of legend. It explores not just the deities and mythical figures in Hinduism but also concepts such as karma and rebirth.

Immortals and their Battles

Are you looking for larger-than-life battles set in space? Please pick up A Spark of White Fire by Sangu Mandanna if so! This is another Mahabharata-inspired story but includes elements of science fiction. I think the author balances the space setting and fantasy elements perfectly. This also involves gods, prophecies and the chosen one trope but has a refreshing take on them.

Which character do you find as intriguing as you do terrifying?

I thought long and hard about this and I have to say Shuos Jeddao from Ninefox Gambit by Yoon Ha Lee. He could also count for the fictional genius prompt as he stays three steps ahead of his enemies every time. He’s a known loose cannon who was locked up for war crimes and speculation is rife whether it was a loss of control or deliberate. There are no concrete answers even at the end of the first book, which is why he terrifies me. I really should crack on with the rest of the series but fans of hard sci-fi or math will surely enjoy this one!

What’s a book rife with political intrigue that you enjoyed?

The Daevabad trilogy by S. A. Chakraborty wins this one hands down, any day of the week. The world is largely inspired by actual world history, which brings the setting to life vividly. Religious allegiances, ambitious lynchpins, coups, betrayals and magic – all of these tie into the complex political backdrop. Pretty much every character has a morally grey side, which makes them well-rounded and believable in a city like Daevabad. This is one of my all-time favourite adult fantasy series that I want everyone to read!

✨Related: The Empire of Gold by S. A. Chakraborty (spoiler-free review)

A Trio to Reckon With

I feel like this particular trope has died down a bit in recent years, which is why I picked a backlist title for this prompt. Laia, Elias and Helene from An Ember in the Ashes are my current favourite trio and I can’t choose a favourite. Although I like Helene a little less, the way her character is full of contradictions makes her the most interesting. I binged this series in a few short days because of how wonderfully Sabaa can create tension and maintain suspense. If you are looking for a dark and gritty fantasy, this one is for you.

Companions for the Darkness

If you are also a fan but haven’t been tagged, please consider yourself tagged by me. Don’t forget to link back to this post or Vee’s or Krisha’s so we can chat with you. Let’s share the love for this amazing series before The Burning God comes for us all! Feel free to use the banner below that was created by the extremely talented Nidhi Shetty (check out Vee’s post for links to download different formats). Here are the links to all our posts –

Have you read any book in this series? Will you be joining me and Krisha for the readalong? Did you like the prompts of The Poppy War book tag? Let me know in the comments section below. Hope you are having a magical week, readers from Earth!