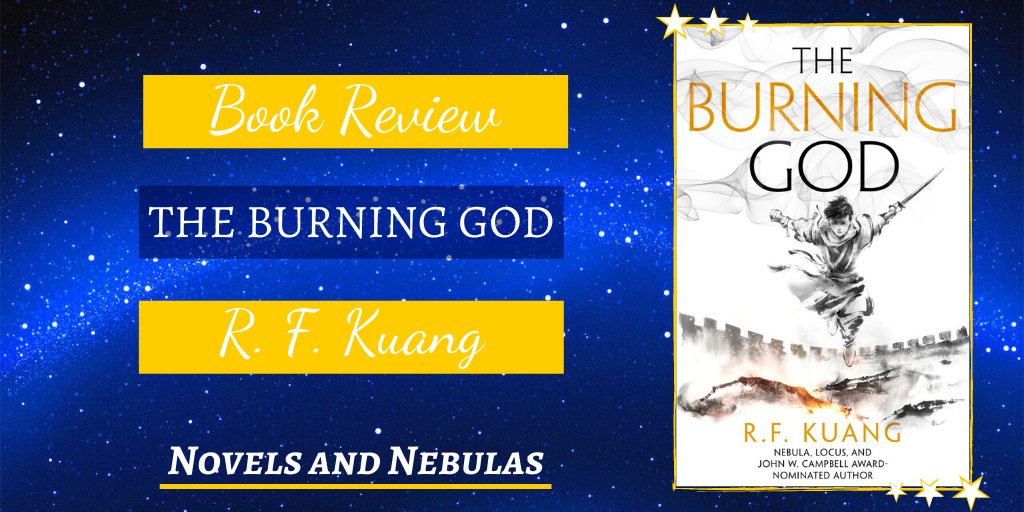 ✨Series: 3rd in a trilogy

✨Publisher: Harper Voyager (US and UK)

Spoiler alert for The Poppy War and The Dragon Republic

After saving her nation of Nikan from foreign invaders and battling the evil Empress Su Daji in a brutal civil war, Fang Runin was betrayed by allies and left for dead.

Despite her losses, Rin hasn’t given up on those for whom she has sacrificed so much – the people of the southern provinces and especially Tikany, the village that is her home. Returning to her roots, Rin meets difficult challenges – and unexpected opportunities. While her new allies in the Southern Coalition leadership are sly and untrustworthy, Rin quickly realizes that the real power in Nikan lies with the millions of common people who thirst for vengeance and revere her as a goddess of salvation.

Backed by the masses and her Southern Army, Rin will use every weapon to defeat the Dragon Republic, the colonizing Hesperians, and all who threaten the shamanic arts and their practitioners. As her power and influence grows, though, will she be strong enough to resist the Phoenix’s intoxicating voice urging her to burn the world and everything in it?

Note: I received an ARC from Harper Voyager via NetGalley in exchange for an honest review

Characters and Representation in The Burning God

The main reason this has become one of my all-time favourites is the cast of characters. Rin, Kitay, Venka and Nezha are so memorable and complex in the best possible ways. Each character gets their own arc in this book, which was really well done considering the scope of the narrative.

Rin’s story comes full circle in this book and the reader gets to see how the events so far have changed her worldview completely from the start of The Poppy War. I also loved the platonic relationship between Rin and Kitay – the only pure and wholesome thing in the entire series, to be honest. It is hands down the best friendship between a girl and a boy that I’ve read in a book in my lifetime.

Coming to the side characters, we are introduced to some new ones and the old ones get satisfying endings in this book. If you are curious about Jiang or Su Daji, The Burning God digs deeper into the story of the Trifecta and their dynamic. My favourite, just like in the previous books, is Chaghan and I wish we got to see more of him.

Plot and World-Building in The Burning God

Similar to the other books in the series, this has a really solid plot with a lot of intense action scenes. Even though the series has many battles and wars, the way Kuang writes about it is simply masterful. I especially love the usage of the war tactics that she incorporates from historical texts and Chinese classics.

The one small quibble I had with the pacing is that the last 30% or so feels very rushed to me. A lot of things happen that build up to the final chapter that I wish had more time to develop so it could really sink in. However, the ending is so well-crafted that I couldn’t stop even though I had tears streaming down my face.

I really liked how we got to explore more of the wonderful world Kuang has built in this series. We see parts of Nikara that we didn’t previously get to explore and we’re introduced to more gods from the Pantheon. There’s one scene where a mountainous terrain is described gorgeously, which made me stop and admire the beautiful prose.

Writing Style and Themes in The Burning God

Kuang’s writing has improved leaps and bounds since The Poppy War and it is very apparent in The Burning God. Each scene included in the book built up the story and it was edited very crisply too. I definitely plan to re-read it in audio format once it releases so I can appreciate the craft part even more.

I initially struggled with the way the themes resolved because it threw me for a loop. After ruminating over my thoughts for a few months, I realised it has more to do with the gaps in my knowledge of history and lack of context to parse the themes the book presented. I plan to delve deeper into the historical aspect and re-read the whole trilogy with a fresh lens soon.

From beginning to end, this has highlighted the cost of war, colonialism and imperialism on individuals, cultures and nations. The Burning God drew all of those into an epic conclusion that made a huge emotional impact on me. Overall, a fantastic conclusion to one of the best series I’ve read and I’m immensely grateful I got to experience it at the right time in my life.

The Burning God is a fitting finale to a series that has earned its place in lists such as The 100 Best Fantasy Books of All Time. This is a series that I recommend all the time to anyone looking for fantasy books and can handle the heavy topics the books tackle. If you have been on the fence with regard to reading this, I don’t think I can make a stronger argument for why you absolutely need to than this review.

If you haven’t read The Poppy War yet, definitely add it to your TBR because this series has impacted me in the most wonderful way! If you’ve already read it, how badly are you craving The Burning God? Do you have any grimdark fantasy recommendations by BIPOC or women authors? Let me know in the comments section down below. Have a stellar weekend, readers from Earth!