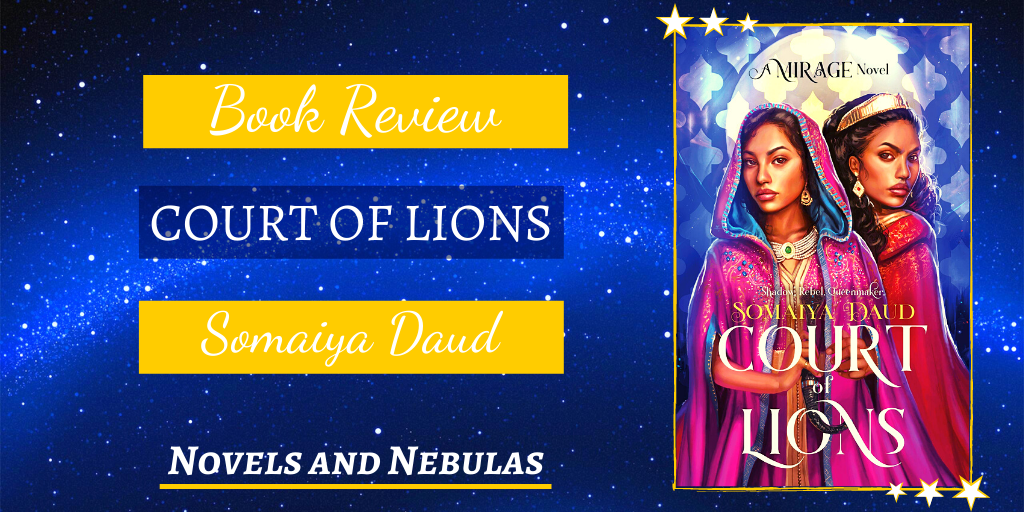 ✨Series: 2nd in a duology

Two identical girls, one a princess, the other a rebel. Who will rule the empire?

After being swept up into the brutal Vathek court, Amani, the ordinary girl forced to serve as the half-Vathek princess’s body double, has been forced into complete isolation. The cruel but complex princess, Maram, with whom Amani had cultivated a tenuous friendship, discovered Amani’s connection to the rebellion and has forced her into silence, and if Amani crosses Maram once more, her identity – and her betrayal – will be revealed to everyone in the court.

Amani is desperate to continue helping the rebellion, to fight for her people’s freedom. But she must make a devastating decision: will she step aside, and watch her people suffer, or continue to aid them, and put herself and her family in mortal danger? And whatever she chooses, can she bear to remain separated, forever, from Maram’s fiancé, Idris?

Note: I received an ARC from Flatiron Books via Caffeine Book Tours for a promotional blog tour

Characters and Representation in Court of Lions

Somaiya is excellent at writing characters that are interesting and have a lot of depth to them. The cast of characters was expanded in this book and every new side character introduced leapt off the page. Among the familiar side characters, I liked Idris’s character journey and Nadine’s character also had more complexity to it.

One of the things I look for in a sequel is how the characters have grown from the previous book and Amani in Court of Lions was so much stronger than the girl we met in Mirage. Maram’s redemption arc was crafted perfectly and I could sympathise with her so much more. Amani and Maram’s relationship developed into a beautiful sisterly bond, which I appreciated a lot.

My favourite new character, however, was Aghrass. The romantic aspect really took me by surprise because it had a lot of yearning that made me root for both the couples. This also upped the stakes in the plot and added to the conflict instead of taking away from the main thread, which I’ve seen a lot of in YA but don’t enjoy.

Plot and World-Building in Court of Lions

I think this was because of the mental state I was in when I read it but I found the plot to be slow and lacking in urgency. While the stakes were pretty high, I didn’t feel tension and danger that would have compelled me to finish it in one sitting. However, if behind-the-scenes political machinations is the kind of thing you love, this book fits the bill magnificently.

Having said that, the world-building took my breath away and I had to expend a lot of effort into putting down the book because of it. The world feels rich, complex and incredibly real because of the level of detail the author goes into. Not only are the sci-fi aspects well-executed, but the history, politics, culture, food and clothing are also described delightfully.

It really fulfilled the aspect of escapism I look for in SFF books because of how vividly everything came alive in my mind while reading it. This book also delved more into the political and power structures, which added to the world-building that was presented in Mirage. I also loved the inclusion of the subtle variances in language, dressing styles and food among the Andalans that highlighted how wonderfully diverse the people were.

Writing Style and Themes in Court of Lions

I normally swoon over flowery writing but just because I was not in the mood for it, I didn’t enjoy the writing on an emotional level. As someone who loves to read, I could really appreciate the writing because the prose flows flawlessly. However, I found myself re-reading or skipping lines because I wasn’t fully invested at the time of reading.

Court of Lions covers such a broad variety of themes that it would be impossible for me to provide my opinion on all. What struck me was that the female characters showed every kind of strength from brave warriors to clever politicians. The world-building leaned into a system that favours matriarchy and women in power, which was a breath of fresh air.

It was interesting that we got both Maram and Amani’s perspectives because it showed the differences between them and their attitude towards colonialism. While it is easy for Amani to see how wrong and unjust the system is, Maram, who was raised on Vathek principles, struggled to overcome that and do right by her Andalan subjects. She also grappled with reclaiming and reconnecting with her mother’s heritage, which was heartbreaking and portrayed exquisitely.

The duology is perfect for anyone who loves world-building in SFF. While it is definitely on the slower side in terms of plot than I typically see in YA, it has excellent characterization and really good writing. This is a Moroccan-inspired series with an F/F romance, so anyone looking to diversify their shelves should definitely add it to their TBRs!

Somaiya Daud is the author of Mirage and holds a PhD from the University of Washington in English literature. A former bookseller in the children’s department at Politics and Prose in Washington, D.C., now she writes and teaches full time.

Have you read Mirage? Do you have any North African-inspired SFF recommendations for me? Which recent F/F romance is your favourite? Let me know in the comments section down below. Have a stellar weekend, readers from Earth!

4 thoughts on “Book Review: Court of Lions by Somaiya Daud”