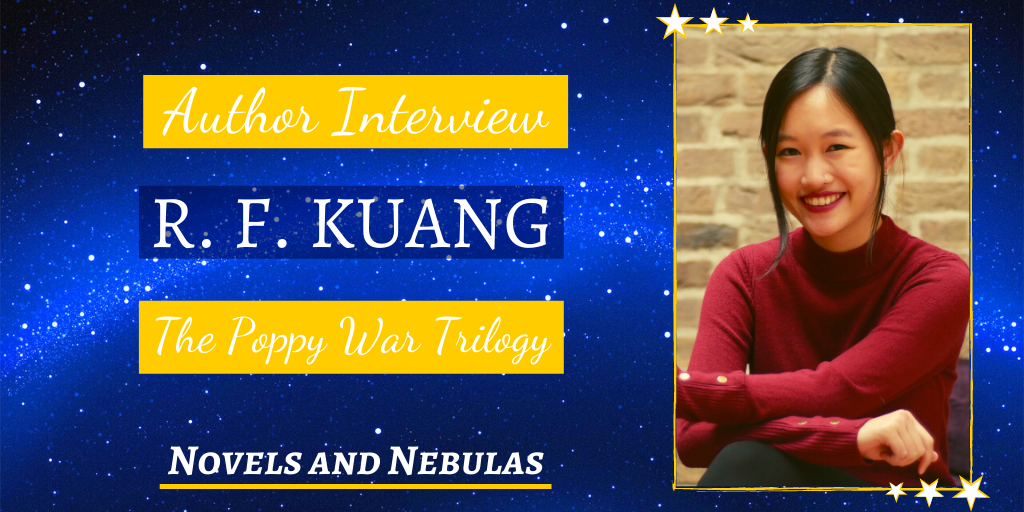 We are only weeks away from the release of the final book in The Poppy War trilogy, which comes out on November 17th, 2020. To celebrate that and spike your excitement, today I bring you the blog post I’m most proud of this year – an interview with the one and only R. F. Kuang. I am immensely lucky to have been granted this opportunity along with other amazing Asian bookish creators. I love how Rebecca insisted on making it more of a conversation and I hope that you all get to know her (and me) a bit more from this. With that little introduction aside, let’s get into the Q&A part!

N: Judging from your updates on the dark academia WIP on Twitter to translation work, is it safe to assume you’re a language nerd? What particularly fascinates you about languages?

R: I am a language nerd! I’m fascinated by translation in particular–mechanics of, politics of, and philosophies of. I didn’t learn until last year, when I started translating professionally, how much translation has to do with power. First, there’s the privileging of certain languages over others in the global literary economy–why, for example, is it such a mark of prestige to have your work translated into English? Why do we consider works written in certain languages more worthy of reading than others? Then there’s the translator’s power relative to the author’s, particularly when the translator is working in a privileged language (such as English). Irresponsible translation can produce a great deal of harm if it’s done in ways that exoticize, misrepresent, or warp the original text. My fourth book, which I’ve been calling the Oxford novel, tries to address these translatory power differentials.

✨Related: Diagram and Story: A Conversation with R.F. Kuang (Clarkesworld)

N: Your answer has made me even more excited for your next book! On a slightly different note, Since sci-fi and fantasy are often lumped together, do you think you might like to try your hand at science fiction someday? Who are some of your sci-fi faves?

R: I’ve written one SF short story, actually! I was invited to contribute a story to the anthology The Empire Strikes Back: From a Certain Point of View coming out this November. It’s a collection of short stories describing scenes from Empire from the perspectives of minor characters. I can’t say who I got to write yet, but I can confirm it was incredibly exciting.

Writing SF always feels a bit intimidating to me because there’s so much vocabulary and technical language that I just don’t know. I think popular SF operates from a shared vocabulary and understanding of, say, how a ship flies through space. I don’t speak it. I’m not a STEM nerd at all, so I wouldn’t know the first thing about gravity and lightspeed and all… that. I do love reading SF, though! I’m a particularly huge fan of Ted Chiang’s short stories. My boyfriend and I buddy-read both of his anthologies during quarantine and spent hours every day discussing the philosophical ideas he plays within his work. It’s actually inspired us to co-write science fiction short stories together! My boyfriend studies philosophy, so he presents the ethical dilemmas and I think about ways to structure it as a short story. We’ve just started work on our first story. I’ve no clue if they’ll actually be published anywhere, but it’s so much fun to generate something from our combined fields.

It seems like fantasy as a genre is a bit more diverse than SF currently is. Are there any SF titles by Asian authors that you would recommend? I’ve recently enjoyed work by Ken Liu and Liu Cixin, but I’m always looking for more!

N: If the short stories do end up getting published, you can be sure I’ll be queuing up to read them because I’m a huge science nerd and I really want to read more sci-fi. I didn’t grow up with Star Wars nor was I exposed to the sci-fi genre in my childhood, which I find very interesting because even though our culture puts a lot of importance on doing well in STEM subjects, I can’t think of a single science fiction piece that made a huge cultural impact here in India.

I read The Three Body Problem last year and that sparked my interest in reading sci-fi again because that hit the sweet spot for the physics enthusiast in me. I have personally read and loved Dragon Pearl by Yoon Ha Lee (MG) and A Spark of White Fire by Sangu Mandanna (YA). Want by Cindy Pon (also YA, more cli-fi/dystopian) is very high on my TBR and I’ve heard nothing but good things about it.

Since we’re talking about Asian authors, here is a question that is often on my mind. What changes would you like to see in the adult SFF industry to make the space safer and more inclusive? The industry certainly has a long way to go but (made evident by the recent Hugo ceremony – your acceptance speech was amazing, BTW!) what do you think readers and authors can do to influence those changes?

R: I don’t think the onus should be on readers or marginalized authors to make spaces more safe and inclusive. The onus should be on the people making those spaces unsafe and exclusive: the people who think it’s alright to hit on vastly younger writers at bars, to touch them inappropriately and without their consent, and to make racist and sexist comments. That’s their problem. I just want them to stop.

What marginalized authors can and should do is form a community. I’m still here because of the older BIPOC authors who took me under their wing, made me feel heard and important, and warned me about/protected me from abusers in the industry. We really show up for our own, and I think that’s amazing.

Similarly, what practices do you think that reviewers, Booktubers, and book bloggers on the reader side should adopt to make those spaces more inclusive?

✨Related: How to Read Diversely: 5 Tips to Expand Your Reading

N: Firstly, I would love for the SFF reading community to acknowledge the fact that the current industry is biased and prioritizes straight, male, cis-gendered and able-bodied narratives, which actively contributes to a lot of the harm towards authors from marginalized backgrounds. Second, I wish people would use their power as consumers to hold authors and publishers accountable and stop supporting people in the community who have a history of bad behaviour like racist micro-aggressions, sexual misconduct, etc. Third, and most importantly, as bookish influencers, I do believe it is our moral responsibility to read diversely, promote and uplift authors from marginalized groups (because the current industry isn’t the best at doing that) as well as stop hyping up or recommending problematic authors.

R: Finally, tell me more about Bharatnatyam! How much training have you gone through to get to where you are, and are there any novels where you find classical Indian dance well represented?

N: For those who are unfamiliar, Bharatnatyam is a South Indian classical dance and I’ve received training in this art form in the Pandanallur style since my childhood. I started learning when I was 8 and continued almost all the way through to the third year of undergraduate studies (with a few breaks in between), so that was totally about 12 years of classes. I, unfortunately, haven’t been able to continue my training after getting a job but I practice whatever I have learnt occasionally and I really want to get better at that. Empire of Sand by Tasha Suri has a magic system based inspired by Bharatnatyam and I loved that book so much! Another book that mentions Bharatnatyam is The Gilded Wolves by Roshani Chokshi, where it is used in a very intense scene that highlights how aspects of POC cultures were separated from their sacred ties to be performed as entertainment for the colonizers.

The exciting end to The Poppy War trilogy, R. F. Kuang’s acclaimed, award-winning epic fantasy that combines the history of twentieth-century China with a gripping world of gods and monsters, to devastating, enthralling effect.

After saving her nation of Nikan from foreign invaders and battling the evil Empress Su Daji in a brutal civil war, Fang Runin was betrayed by allies and left for dead.

Despite her losses, Rin hasn’t given up on those for whom she has sacrificed so much—the people of the southern provinces and especially Tikany, the village that is her home. Returning to her roots, Rin meets difficult challenges—and unexpected opportunities. While her new allies in the Southern Coalition leadership are sly and untrustworthy, Rin quickly realizes that the real power in Nikan lies with the millions of common people who thirst for vengeance and revere her as a goddess of salvation.

Backed by the masses and her Southern Army, Rin will use every weapon to defeat the Dragon Republic, the colonizing Hesperians, and all who threaten the shamanic arts and their practitioners. As her power and influence grows, though, will she be strong enough to resist the Phoenix’s intoxicating voice urging her to burn the world and everything in it?

Rebecca F. Kuang is a Marshall Scholar, Chinese-English translator, and the Astounding Award-winning and Nebula, Locus, and World Fantasy Award nominated author of the Poppy War trilogy. Her work has won the Crawford Award and the Compton Crook Award for Best First Novel. She has an MPhil in Chinese Studies from Cambridge and an MSc in Contemporary Chinese Studies from Oxford; she is now pursuing a PhD in East Asian Languages and Literatures at Yale.

If you could ask R. F. Kuang one question, what would it be? Are you looking forward to the release of The Burning God? What are some of your hobbies besides reading? Let me know in the comments section down below. Have a stellar weekend, readers from Earth!

12 thoughts on “An Interview With Author R. F. Kuang”